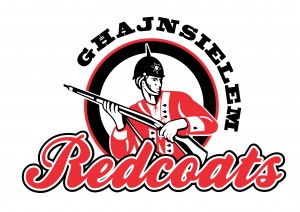 The name Redcoats was chosen to honour the British soldiers that over a period of more than a hundred years stayed at Fort Chambray in Għajnsielem.

On September 11, 2012 the name, uniform and badge of the new Għajnsielem baseball and softball club were unveiled.

The name Redcoats was chosen to honour the tens of thousands of British soldiers that over a period of more than a hundred years stayed at Fort Chambray in Għajnsielem. Sports such as football, cricket and tennis were first played in Gozo within the walls of Fort Chambray. The red and white uniform is similar to that worn in battle by the Redcoats. Paul Stellini designed the badge depicting a Redcoat soldier in action.

The initial aim was to introduce the idea of baseball and softball as a participation sport, rather than as a spectator sport.  Considering the numerous players that participated in the competitions organised by the Malta Baseball and Softball Association in 20012/13, the women’s  regular practice sessions and occasional exhibition game, and Tee-ball participants this aim has been achieved. Interest in the team and the sport has continued to grow as can be manifested by the data from the Redcoats’ Facebook page, which was also launched on September 11, 2012.